A star is born

I'm off to make my film debute! My boss called me on Monday and said that our school is making a commercial and I was the one chosen to "be the teacher." Of course I won the job by pure default! I am the only Jewish teacher in town and more importantly I was not there to say no! It's that whole, "You'd better be there or you'll be volunteered" syndrome. We film it today and edit it tomorrow. It is a 30 sec. commercial so my part will be all of MAYBE 10 secs. Still, I've prepared my floppy hat and big sunglasses, we've paparazzi proofed our house and I've been working perfecting my autograph. La De Da! You can all say you "knew me when." ( in reality I'll probably be a bumbling idiot, look 40 lbs. heavier and sweat the whole time!!!!!!! Ah the price we pay for fame!) I'm off..................
Posted by Marla at 7:32 AM 6 comments: 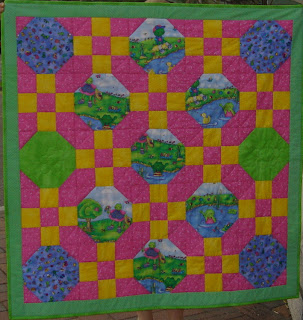 I finally have quilty pictures. I finished 1of 2 quilts baby/toddler quilts. It is a good thing I am adaptable. First I lost one of the fussy cut panels....how?? I have no idea. Maybe at Joanns while buying matching fabric but I only had 7 panels....odd number. Luckily I bought some of the green and filled in but it took a while to figure out how to do the placement. Then I had just enough pink for the blocks and not enough for the binding. Oh well. I think it looks nice for something I did quickly. Now I just need to finish her sister's quilt.

I also finished a UFO!! Yeeee HA! It is a silly reversible smock for work. All I needed to do was make the bias and attach. It;s been sitting there for 2 years!

I love this smock pattern. I changed it to make it reversible. It is a Daisy Kingdom pattern. I've made a number of them. I like it because it is long. Trust me with little ones you don't get dirty on your upper body. They only reach my knees and that is the part of my clothing that gets the messiest! The only problem is I made the x-large. By the end of the summer it will be falling off my shoulders.....After waiting to use it for two years, I'll pin the thing to me!

What a mish mash I have here. I found all the pictures I haven't posted. I am clumping them all together in one post. 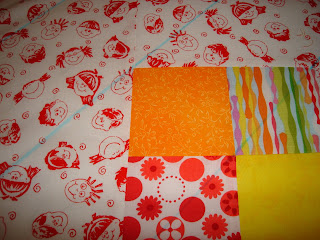 I haven't posted a quilty picture or message in a while. That's where I'll start. This is a teaser picture of a toddler quilt I am working on. I am annoyed with myself though. I put it on my design wall to figure out the quilting. As long as it was there I figured I'd mark it with my washout blue marker....you know the one....it cannot be ironed. AFTER I marked 1/4 of the quilt I remembered that DUH! I hadn't' fused the batting and backing yet! Since I have made a vow to look at life half full instead of half empty, I am choosing to think that at least it is 3/4 UNMARKED! (It's still annoying though!).
________________________________________

This is a picture of the "birthday cake" a friend made for me. She kept drilling me on what I'd be willing to eat. I thought this was so nice. The flowers are turnips dyed with food coloring. 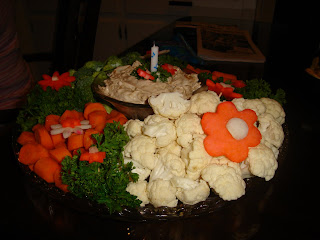 I thought that these came out so, so cute that I had to share the picture. We made these mouse pads for a some of the staff at work. They always do so much for us and I thought it would be nice to recognize them at the end of the year. Each child put on their fingerprint and then got to decide if they wanted to be a butterfly, ant, spider or ladybug. The kids really enjoyed making them and the recipients were thrilled. I wish that I'd made one for myself!! 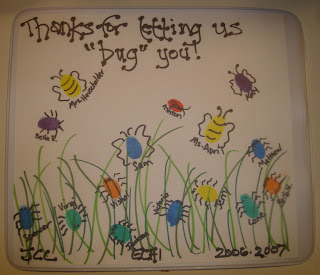 Not a very inspiring 100th post but ...... I am really enjoying this blogging business. Good people out there in blogland. Now I just need to get busy and save all of my posts so that I can print a hard copy for posterity.
Posted by Marla at 12:13 PM 3 comments:

We had a fun Father's Day. Well, not Father's Day itself, but our celebration. Yesterday our girls were supposed to begin their vacations with our families in Ohio. Unfortunately mother nature and Continental Airlines had different ideas. To make a long story short, after sitting in the airport all day, their flights were cancelled, their trip delayed/shortened 2 days....just a mess.

We actually celebrated Father's Day on Sat. Mr. Fancypants and Mrs. S brought over a video game and we had a ball. I can't seem to remember the name of the game. It is for the Playstation 2 and I think it is called guitar hero or guitar master or some such thing. The gist is you use a guitar plugged into the game and as the notes come on the screen you hit the corresponding buttons. It's like those arcade games that you dance to the beat. I found this video on youtube that shows an advanced level being played.
http://youtube.com/watch?v=V17MLDqG8Bk
We had a blast because they thought their dad would have fun with the game but guess who actually like it???!! They were all so surprised that I was able to play the game (as if I am some dottering old woman that has lost all eye hand coordination, rhythm and coolness! Sheesh! I'm not that old!!!).They were not only shocked that I was able to get through without "getting killed" but that I continued to play again and again. I think I had so much fun because they were so surprised that I could do it. (I remember when my dad would surprise me in the same way. Just about the time I thought he was too old to do anything he would remind me that HE wasn't a dottering old fool! Once I sprayed him with the hose and he shocked me by chasing me a long way up a hill until I got away.)
Here I am...laughing at them laughing at me. 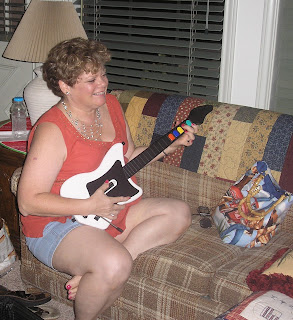 DH.....thinking he could do it with no trouble but discovering that it was not easy..... 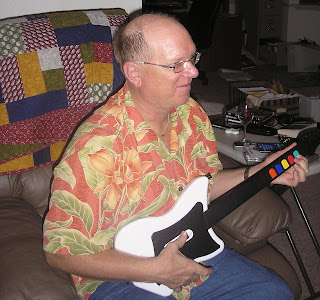 Ms. A......Heaven forbid she should smile in a picture......She was too busy being competitive. 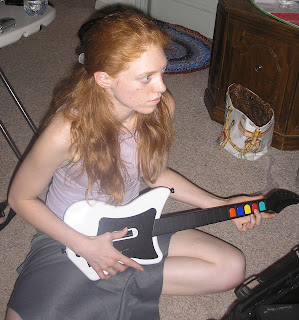 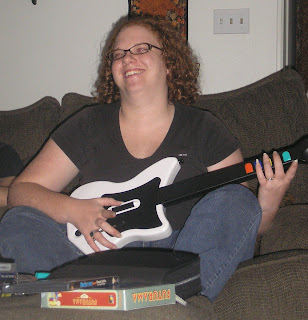 Mr. Fancypants.....he just wanted to win!Of course it was his game so he was really good at it. 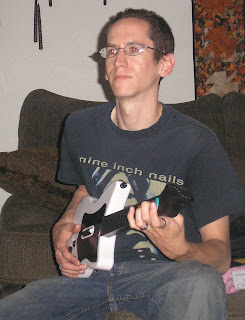 I hope everyone had a lovely Father's Day. I will post something quilty this week. I feel guilty that I haven't posted quilty in a while..... Been creating, just not finishing anything.

Like a commercial, my husband went crazy at Best Buy. Because I was the lucky recipient, I decided not to holler at him! Two years ago DH said I NEEDED an ipod/mp3 player. We actually had an argument in the middle of Best Buy.

"You need an ipod and that is what I am going to buy you for your birthday!"
"But. I don't listen to music. I don't need an ipod!!!"
"But you listen to books on tape. You'll put a book on there."
"But it will only hold one cd. What's the point!"
"You'll see! You're going to love it."
I never used it. Not once. We got the thing home, he loaded his music on it, said "see, isn't this neat!" and merrily used the thing for the next 18 months. I on the other hand was gypped out of a birthday present! LOL! For his birthday this past year I bought him a PS2. It was a huge hit. He travels alot and he uses it constantly. He plays games, watches movies and listens to music. The mp3 player was thrown in the drawer. I started walking again 3 weeks ago and complained about my cd player. "AHA!", he says. "I told you you needed a mp3 player!" Oh yeah.... Mine is in the drawer....He loaded the two cd's that I own on it and I have been merrily walking for the past 3 weeks. Saturday we celebrated my birthday. Here is what he bought me......

This holds about 8 million songs, plays video, stores pictures....the only thing it won't do is actually walk for me.

"But I use this piddly little mp3 player very happily."

"But on this one you can download and play 'Gray's Anatomy' for only $2.

"But you can load your QUILT pictures on here to show your friends."

"But then I'll need to carry the thing with me!"

Now I really do like the new player. It is smaller, has a larger memory and plays a nice radio. I can actually load an entire book on it and hold more music than I'll ever listen to. I just think it is so funny that even though the piddly one was good enough for me, it wasn't good enough for DH! Funny, funny!

On to gift #2. We bought Ms. A a new computer. She got a brand new, fancy schmancy 19" flat panel monitor. I keep threatening to steal the thing from her. So, DH bought this.....

I love this monitor. It sits further away from my face so is much more comfortable. I would have been happy with one or the other of these gifts but both....at first I was stressed at receiving two such big gifts. But then I looked at how happy it made DH and decided I needed to quelch my stress, say thank you, and enjoy the gifts.

"Now you can watch 'Gray's Anatomy' on a big screen."

He must think I have a fixation on 'Gray's Anatomy'!

Happy Birthday to Me 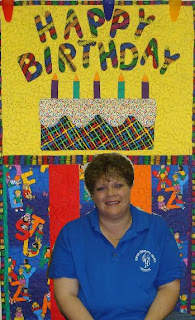 Usually I don't have such a love affair with my birthday. For some reason though, this year I have been looking forward to my "special day." What am I doing special? Nothing! I've just been looking forward to my birthday day. Weirding out here in Texas I tell you, weirding out! (The picture is one I put in each end of the year photo album. I made the birthday banner and each child gets their picture taken with the banner on their birthday. I had to cut and paste myself into this picture because at the last minute I had the idea to include myself in the birthday pictures! )
Posted by Marla at 7:41 AM 13 comments:

Why post a weight loss tracker on a blog that strangers read? Why am I announcing my not so petite number on the scale? Because I am absolutely tired of it! I will either succeed in public or fail in public. A few years ago I lost 50 pounds......I found it on the scale February! I've decided that I will never lose weight again. I need to get rid of it forever. Whenever I lose weight, I seem to be able to find it again! So, I have set my goal realistic. I've never been thin. I will never be svelte. I would however like to fit into regular sized clothes, not be ashamed of the expanse of my backside, and look more fit. I'm on my way. I've lost almost 35 lbs. since February. I've begun to exercise again. I also am able to wear a number of the clothes that I'd put away in disgust after I'd outgrown them. I don't know what I am going through lately but as I told DH...Hang on for the ride!
Posted by Marla at 7:15 AM 7 comments:

with my template and header. I like the pictureI chose but am unable to move it to the left....Anyone know how??????
Posted by Marla at 7:00 AM 6 comments: