State of my backside

New resolve. New determination. (uhm...and no more pizza) I really only have 30 more lbs to lose. I've already lost more than that so it should be easy peasy right!???? If I could only get taller instead.....

Now we will go back to our regularly scheduled quilty posts!
Posted by Marla at 8:36 PM 2 comments:

My design wall "a few miles down the road" now looks like this!

You know what that means? Yes indeedee! The quilt is quilted and being bound. No more peeks at it until it's finished and hanging at the quilt show! However, to be fair, I'll give you a little teaser at the so-so quilting. (I'm pleased because it's the best I can do but I'm not thrilled with my best. Make sense.) 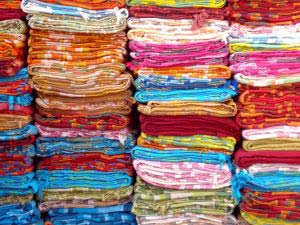 It's all I can do to keep up with the crazies of planning a wedding....I'll be posting sporadically until it's over. BUT! BUT! BUT! I, for once, did not purchase one little teeny, tiny piece of fabric!!! Of course, I have nothing to the minus side either but......I will! I only count the "out" when a project is finished. Hopefully next week will be an "out" week!

Judy is the keeper of the statistics! Hop over there and see how other quilters are busting their stash!

Not being cat people...ahem....we are always surprised by the funny things this silly cat does. You daresn't leave a chair for a second or you have an instant seat cushion! She loves to sit at the kitchen table with us during dinner. Poor DH got up to get a napkin and was greeted by this at his return.

Like a small child, only a face a mother could love and INSIST on showing off!! LOL!! Thanks for indulging me with these Minkee Monday posts. They soooo amuse me.
Posted by Marla at 6:38 AM 2 comments:

Until Aviva's wedding canopy is finished, my design wall is a few miles down the road on Ms. CCCat's longarm.... I therefore submit a story about my "design wall" along with pictures, in lieu of the real thing..... 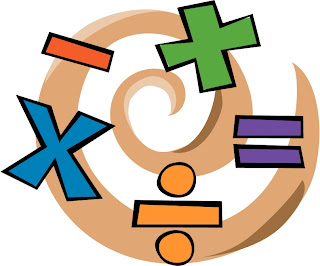 I am a math idiot. If there was a book, Math for Dummies, I would need to own it. Geometry to me reads, Gee, I’m a Tree. When I went to college, my degree required no math classes at all. I however, had to take a rudimentary math class! It was computations and probabilities. It was a two week course and I couldn’t pass it!!!

Also, I decided that it would have been soooo much easier to have been born any other religion then Jewish. Christians have crosses (a rectangle and squares) Muslims have a crescent moon (circular and therefore appliqué able) but Jews, Jews have the Star of David…. 60 degree triangles!! Not good when you are a math dummy!!!!

Aviva’s chuppah (wedding canopy) is based on 6 pointed stars. 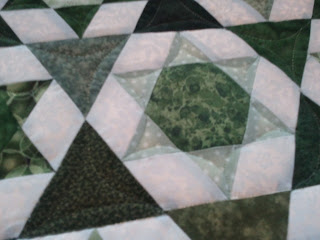 Each star is based on a 60 degree angle. At some point when I was cursing the borders on the chuppah, I shouted out, “What angle am I supposed to set this at!!!” From the other room, DH aka the guy that READS MATH BOOKS, calmly shouts back, 30 degrees….HUH!??? I stormed into the other room. NOW WHY WOULD I NEED 30 DEGREES IF THIS IS A 60 DEGREE STAR!!!???? Because,”Mr. I read math books for fun explained,” 30+60 = 90. But why do I need a 90 degree angle if I’m working with 60’s? Big ole sigh from Mr.” I know how to do calculations in my head without a calculator.” Because, if you have a 60 degree angle, the opposite is a 30 degree. WHATEVER! All I care is that this star here, lines up with that star there, and that the borders don’t look wonky.

Fast forward to last week. Ms. CCCat and I are trying to figure out the straight line quilting in the borders. The quilting will be mimicking the 60 degree angle of the stars. I started with the top and bottom. 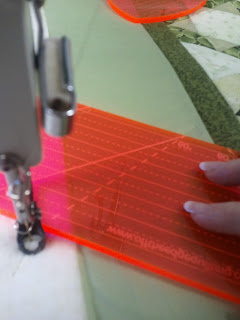 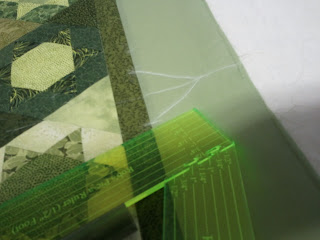 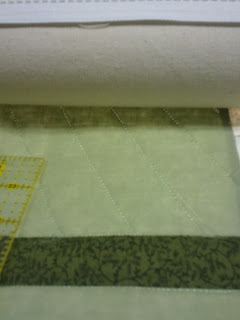 As we were going, I kept saying “How are we going to line up the top border quilting with the side borders? Even though there are feathers between the borders, the lines will need to be in the same place because the eye notices it. I couldn’t explain it but I voiced over and over about these lines needing to match up. Today I finished the top and bottom border. After much agony, we marked the left and right borders….with the same 60 degree angle. I worked on the side borders for a bit until we decided to quit. For some reason I rolled the quilt. UHMMMMMM!!!!!! 60 degrees on the side and 60 degrees on the top will never match!!!!!!! What the heck??? WHY DON’T THESE **&#$%^%&*))*@&^ LINES MATCH!! Suddenly, Mr. “I knew you weren’t listening to my mathly wisdoms” voice was in my head….60 + 30 =90. 60+60 will never = 90.

I still don’t completely get it. All I know is that I need to rip about 10 rows out of my border…and I thank my annoying 60 degree stars that I don’t have another daughter to make a chuppah for!

If I were little, my sister would be running towards my mom shouting over her shoulder, "I'm tellin!" S-I-G-H! Then.....

Scoot on over to Judy's blog and catch up on all the other participating stash busters! Perhaps they are more productive than I!
Posted by Marla at 8:00 AM 5 comments:

Longarms. Lovely fabulous machines that quilt our quilts so beautifully.

Ms. CCCatlover has a wonderful A-1 longarm. Last year we needed to replace the rails. Not as easy as you'd think as you have to lift the entire machine head off of the rails in order to accomplish this. But, we did it. We also were having a problem with the machine being level so Ms. CCC pushed shims while I lifted one area then another. It's like being a mechanic on a car.....with not much of a manual! (Oh she has a fabulous dealer that once walked us through a timing/computer issue for about 1 1/2 hours but mostly these things happen on the weekend or at odd hours and we are on our own!)

Thank goodness Ms. CCC kept the blocks of wood we used to rest the machine on because this year we were at it again! I was prepping to quilt Aviva's wedding canopy. This is going to be the most involved custom quilting I've ever done. Everytime I hit one spot the machine bucked and kicked and knocked me off my quilting line. The machine had been doing this for a long time. At first we thought it was the tracks. Once they were replaced the problem got better but it wasn't perfect. Plus if you let go of the machine when it was at the far right, it would roll backwards. (remember a longarm machine moves side to side and front to back). If you forgot and let go, it would roll and bounce just enough to give you heart failure thinking the thnig was flying off it's housing!!! (also remember I'm a guest quilter. It's not my machine and everytime I forgot and the machine rolled back and went C-LUNK, I'd nearly plotz!)

After a bit of measuring, repositioning a level and head scratching, (notice I said head scratching as we are women and actually scratch our thinking parts) we realized that the machine itself was off level. Fixing it required #1 removing the machine head from the rails,

#2 me crouching down and crawling between the two rails to reach the wheels, (so this picture is posed as when we really worked on it there were no extra hands for cameras!!) #3 both Ms. CCCat and I using muscle to turn, hold and reposition everything, in tandem. At one point we didn't have the right sized piece of equipment. DH said he would bring us one but just the idea of a man entering our inner sanctum was enough to urge us on to fix it ourselves!

In the end, we did it! No directions or instructions. No helpers other than ourselves. That puppy "drives" better than it has in a long time! Just in time for the chuppa-a-thon!!