I may be math challenged....

WhooooHOOOO! Now if I could get someone to CUT all those triangles!
Posted by Marla at 5:42 PM 2 comments:

I am NOT a math genius. For the life of me I cannot figure this out and I know that someone out there will roll their eyes and spit out the answer in 5 seconds. I am making a triangle quilt. The triangles are 60 degrees and finish at 6". I need to figure out how many triangles I need to make a king sized quilt between 105" and 108" with no borders. HELP!!!!! The nearest my feeble brain can figure is I need 9 bazillion triangles! I have 260 cut. Only 8 and some bazillion left.....
Posted by Marla at 12:51 PM 4 comments:

DH and I participated in our city's Citizen Police Academy. It is simply an outreach of the police department. This class is held once a year and we sort of fell into it. There were 24 that started and 18 that finished. It was utterly fascinating! We learned about every facet of the police department. We had informal lectures with the bomb squad, swat, dive team, homicide, drug enforcement, dog team and on and on. The lectures were very informal, informative and filled with visuals. Example, the bomb squad brought their gazzillion dollar vehicle to show us how it works, we went to the crime lab and were shown how various fingerprints are developed and we had a demo by the drug dogs. We were also briefly trained on the guns that the officers in our city use. We then each shot 20 rounds to test our skills. I stink! The culmination of the class was our "graduation." The chief of police was our speaker and we each received a t-shirt and a pin. The pin is the same one the officers receive when they are finished at the academy. It was a great experience. These pics are from our graduation.

DH and I are showing off our new shirts. It seems we are the first class in years to get shirts. We were the 37th class of the Citizens' Police Academy.

I needed my quilting fix while I visited family in Ohio. I found this shop in Kent. It was a lovely
little shop that I never knew existed.

She had great samples. I nearly bought six patterns that were ugly in the package but the samples allowed them to sing. Fortunately I came to my senses and remembered my watch what you buy motto. I ended up with a striped homespun I needed to fill in for my retreat quilt.

More things I've made for my in-laws.

I still LOVE this humpty dumpty. I made this a looong time ago. I still have the pattern....perhaps there is a humpty dumpty in my future!

I made this basket with the Aunt Phillys toothbrush method. My MIL added a wicker basket to give it some body. I tried the other day to make a rug with the same method and just could not do it. I may need to try again but perhaps it's just that I had more patience about 20 years ago.

I was surprised at how many things I've made for my in-laws. I ran around the house snapping pictures.

These were during my ceramics era.....

This gingerbread man is sooo ugly. My MIL insists on putting it out each year.

I don't know why but I've had a harder and harder time getting into the sewing room. Why? Dunno! But it's been progressive....I really think I want to start a new project but I won't allow it until I finish at least one thing I have started. Help! Give me words of wisdom.....visual stimulation......ideas.....It's become a vicious little cycle. Can't start new because must finish old....don't feel like finishing old...........Not finishing the old is NOT an option but I can't seem to make myself do it......Perhaps I just need to whine a bit here?????? Maybe that'll help?????? A swift kick in the backside????
Posted by Marla at 7:35 AM 8 comments:

This was the Novemeber gift to my girls. It is the only month I failed the challenge. I had the turkeys put together but not appliqued.

I had originally thought that this was too big for a placemat but have since re-thought and think they are a great size.
Posted by Marla at 4:08 AM 3 comments:

Labels: Gift of the Month

DH was folding clothes...,.He had a helper! 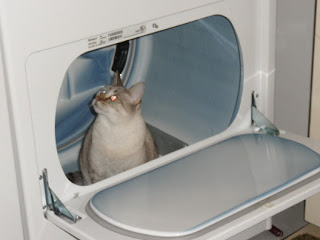 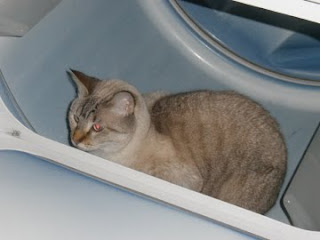 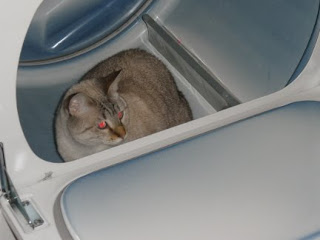 Our Weekend of Napkins

A few weekends ago we got together to make napkins. By the end of the weekend, we had made
somewhere around 80 napkins between three of us. How did we make so many napkins in such a short period? This little template we had made. It is worth it's weight as you zip around it with a rotary cutter and within minutes, you have a finished product!

Ms. CCCat and her featherweight.....

Ms. Ruthie and her "other" project! She didn't make napkins....

No pics of me. Just some samples of my finished napkins.