Before I explain the photo, let me tell you something about my family. Without using real names, I'd like to explain the guys here. My husbands name is ABCDE. My sister's husbands name is also ABCDE. My brother's name is LMNOP and DH's brother is named LMNOP. My daughter, Mrs. S is married to PQRST (known as Mr. FancyPants) and my other daughter (Ms. A.) has been dating for a long time now,)a boy named , yes, you got it, PQRST! Now both of the boys, PQRST's names start with the letter C. Therefore, Ms. A's boyfriend will be known forevermore on my blog as C2. Add to the mix that Ms. A goes by her given name at home and for legal purposes but her Hebrew name everywhere else and I use the names interchangeably, you really need to concentrate on the conversation if you want to know which ABCDE, LMNOP or PQRST or daughter we are discussing! (For many years my friends thought I had three girls. Mrs. S, Ms. A by her given name and Ms. A by her Hebrew name!!!!)

Sometime this fall C2 and Ms. A came home. During the course of their visit I heard C2 say,
"What does it take to get a quilt around this family!" I cracked up because in my sewing room was his gift. I made this quilt in record time. Pieced and quilted in 3 weeks. 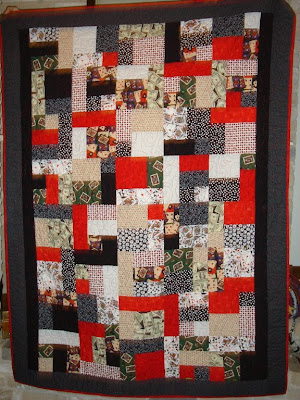 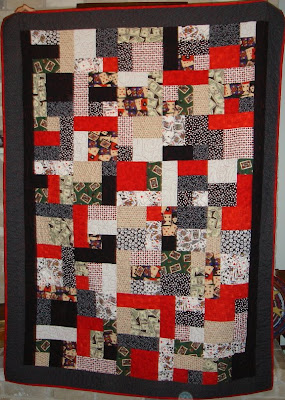 It is free motion quilted on the longarm. I used an allover patter and was amazed by how even I was able to get it. I used Brytes thread. The picture is a bit fuzzy 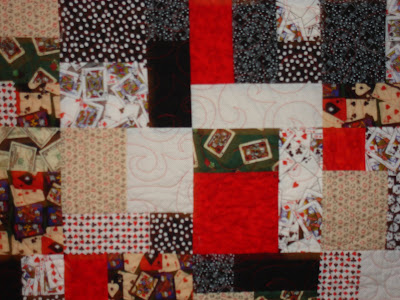 I am upset that I didn't get a betert picture. It sat there waiting for me to give it to him and get a picture and then I was sick and could have cared less! This was the best I could do. You'll have to believe me when I say the quilting is pretty cool.
Posted by Marla at 4:56 PM

I can see the quilting well enough to know it is cool! You are right. I am sorry you were so sick. I have been sick this whole winter break. Even though we are sick, things must get done. We had New Year's Eve pizza! I don't even think we cooked for Christmas Eve! Hope you are feeling better.

The quilting shows up very well on the last photo and it looks great. What a cute quilt!

I like your family-name explanation, Morah! I wonder if there is some genetic predisposition for those duplications of names...

can you tell me what quilt pattern this is? Your quilting shows up very well.

Candace
freemotiongal@yahoo.com
I don't have a blog.:(

I really like the colors in that quilt and you're right it's all very well balanced. Good job!